Jalpaiguri is noted for its historical monuments, which highlight the rich cultural and political heritage of the region ruled by many rulers. Among them, Buxa Fort in Jalpaiguri holds a prominent place as a structure of great historic value and a famous tourist attraction in the Dooars. The Buxa Fort is situated at an altitude of 867 meters above sea level over the Sinchula range.

History of the Buxa Fort in Jalpaiguri 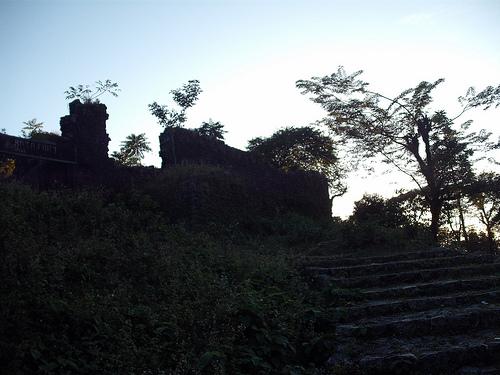 Buxa Fort Ruins (Source: flickr)
Buxa Fort is situated within the Buxa Tiger Reserve, in the Jalpaiguri district of West Bengal. It is about 30 kms from the nearby town of Alipurduar and about 18 km from Rajabhatkhawa, another tourist destination in North Bengal. The fort was used by the erstwhile King of Bhutan to protect the famous Silk Route which connected Tibet with India through Bhutan.  Later on during the unrest which followed the occupation of Tibet by the Chinese troops, numerous monks from diverse Tibetan orders came to Buxa Fort setting up initially a monastic study center and still later a refugee camp, adjacent to the former prison camp of Buxa fort.
During colonial rule, the British rulers on being invited by the Cooch king captured the Buxa Fort and formally took it on November 11, 1865 as per the Sinchula Treaty.  They also changed the fort structurally by replacing its bamboo wood material with stone. In the 1930s, it became infamous as a high security and inaccessible prison after the Cellular Jail in the Andamans to hold mostly political prisoners. Netaji Subhas Chandra Bose is also said to have been detained here for a period of time.

Buxa Fort as a Tourist Attraction 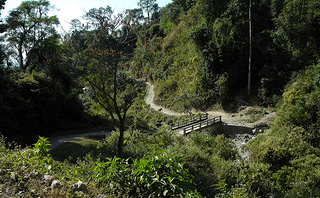 Trek Route around the Buxa Fort (Source: flickr)
The Buxa Fort has gained increasing popularity with tourists both for its historical value as well as for its being a popular trekking destination. Buxa fort is about 18 km from Rajabhatkhawa. From Rajabhatkhawa, one has to reach drive into the forest till Suntalabari which is 13 km from the former place. Trekking starts here and the next 5 km walk may take an hour. On another level, you can also make an effort by driving your vehicle further going one kilometre along that route. The trek route is remarkably well marked with shades and viewpoints on your way. Not only this, the route is quite safe and can be trodden by day or by night, though the supervision of an experienced guide is recommended for night treks.
Some of the popular trek routes which nature and wildlife lovers enjoy include:

The Alipurduar Junction is about 17 km away from the Buxa Fort and this is the nearest railway junction.
NH 31 is the major highway which is at a distance of 25 km from the place. The tourist can hire a private car from Alipurduar as well as from Rajabhatkhawa.
The nearest airport is the Bagdogra Airport at a distance of 195 km.

The tourist can visit the Buxa Fort in Jalpaiguri at any time of the year excepting the monsoon as the forests remain closed.

Accommodation near Buxa Fort in Jalpaiguri

The Buxa Tiger Reserve and the Buxa Fort within it are well known tourist destinations. Hence you will find a range of accommodation in its vicinity. Some of the best options for the tourist are:
All these accommodations are built in a traditional Dooars style retaining an authentic local flavour of the region. So seep in the beauty and historicity of the famous Buxa Fort and enjoy your Dooars tour!