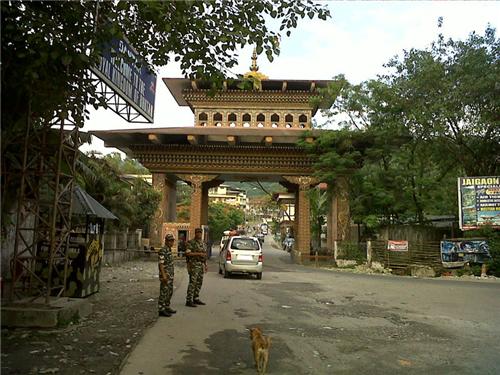 Situated in the Jalpaiguri district within the state of West Bengal, Jaigaon is a small border town and serves as a gateway to Bhutan. Located in the Himalayan foothills, Jaigaon is interspersed with beautiful scenic spots and is a must visit for all Dooars bound tourists who halt here while on their way to Phuentsholing in Bhutan.
Lying opposite the southern town Phuentsholing in Bhutan, Jaigaon prospers through mutual border trade. There is an ornamented Bhutanese gate which separates the countries, and the local population often cross without needing official papers, but the tourist would need a valid Indian passport or a visa by a registered tour guide hired for the purpose. 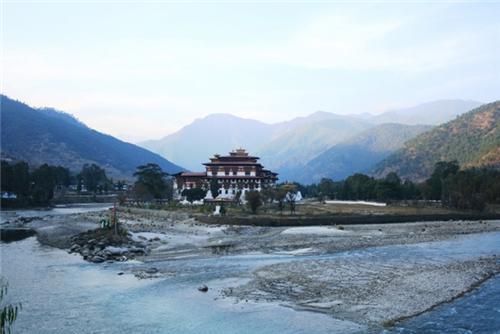 Apart from their thriving economy through border trade and strategic topographical location, Jaigaon is also noted for its largely secular population who live in harmony. Hindus, Muslims, Christians and Buddhists have lived here together for decades and enriched the cultural, religious ethnic and lingual background. In addition, the Mech, one of the scheduled tribes live here in “Mechia Basti’ while the Totos, one of the most preserved Indian tribe reside here on the banks of Torsha River.

The climate of Jaigaon is dominated by two seasons, the cold season and the rainy season. The rainy season is the most prolonged season and starts from June till October. Mid-October to mid-November is the autumn season. The cold season starts from the period of mid-November till mid-March. There is also a short spring season between mid-march to May. 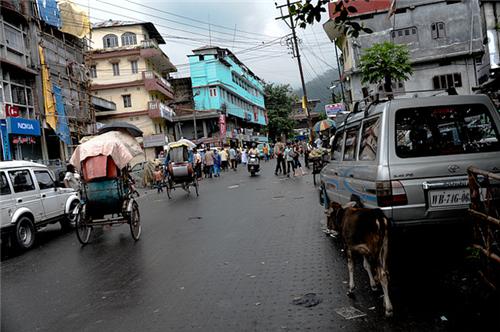 Jaigaon in Jalpaiguri district is located about 145 km from New Jalpaiguri Station (NJP) and 18 km from the Hasimara Railway Station in the central Dooars region. This beautiful industrial town is frequented by travellers from all over India and outside as a tourist destination of the Dooars region. The landscape of Jaigaon is marked by the beautiful Torsha River flowing by its side, thus making its banks an ideal picnic spot. Another stream or a small river Doti, originates from the lower hills of Bhutan near its monastery flows through Jaigaon urban centre. The entire town is surrounded by lustrous tea gardens and green hills.
All tourists visiting Jaigaon also tour beautiful and serene Phuentsholing, on the other side of the border town. Here you will be able to have a view of Amo Chuu, which is a crocodile breeding center, the Karbandi Monastery and the Zangtho Pelri Lhakhang temple which depicts the heavenly abode of Guru Rinpoche.

Travel in and around Jaigaon

The entire city can be covered by an autorickshaw which will take to/from the bus terminal outside the city precincts. You can also walk; however the streets are apt to get muddy during the rainy season. There are shared hired cabs and taxis plying in Jaigaon as well. 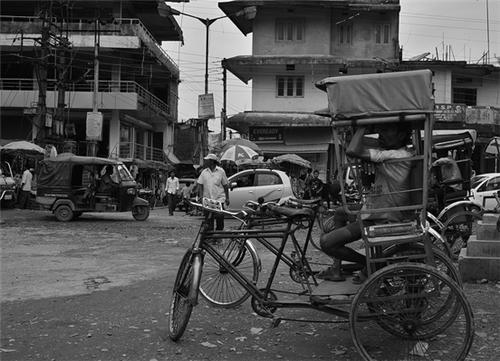 (Source : Flickr)
New Jalpaiguri (NJP) is the nearest railway station to Jaigaon and Phuentsholing, while the nearest airport is the Bagdogra airport.
There are a number Bhutanese transport companies which organize direct bus services between Siliguri and Phuentsholing, while Indian bus companies organize tours between Siliguri and Jaigaon on this side of the border.

This little picturesque town is your entry point if you want to travel to Bhutan. So many tourists make a sojourn here while travelling towards Thimpu, capital of Bhutan as well as touring the Dooars. There are a number of decent hotels and lodges which caters to the tourist with all basic facilities. These are some of the places to rest through the night:

Explore more about About Jalpaiguri