The district of Jalpaiguri has a strong folk culture with their individual folk dance, folk song and folk lore which details their whole socio-cultural life. These songs narrate the emotions and perceptions of the folk communities through which they express and share their feelings and experience.

The different tribes of Jalpaiguri have a rich and variegated body of songs, which reflect its cultural heritage. These folk songs are sung for a variety of occasions like ritualistic ceremonies and folk-festivals. Many of them relate to agricultural activities or ceremonies, others are associated with mythology. Still others are songs of love and yearning, work songs and war songs. There are songs which celebrate new life and lullabies to soothe infants. 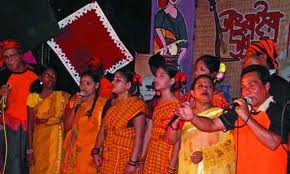 Bhawaiya Utsav in North Bengal
Some of the most popular tribal or folk songs of Jalpaiguri include the “Bhawaiya Gaan” of the Rajbanshis. These consist of both devotional and love songs and are famous throughout Bengal, North-east India as well as Bengladesh. The “Dham Gaan” is a very popular folk song of the Jalpaiguri tribes revolving around the fall and rise of mythological characters.


Folk songs of Jalpaiguri beautifully render the tribes’ interactions and living with the beauty of nature. The song lyrics breathe fresh life into the dense forests, the miles of paddy fields, torrential rivers and narrow rivulets, the rainy season and overflowing riverbanks, the beauty of the sun and the moon, clouds, green fields, blooming white flowers of mid-August and September, the elephant, the crane, the serpent’s beauty, even smaller creatures of nature like the frog and mosquito. Most fundamentally, they speak of the universality of love and the transience of youth weaving magic through its soulful melody. They are a cultural treasure house.