The land of Jalpaiguri has been blessed with an ancient history which has seen the rise and fall of several dynasties and empires. This has resulted in the construction of historic edifices constructed by different rulers over a varying period of time. Needless to say, they are of great historic and architectural value and are visited by tourists from all over the country.

Such a structure of historic prominence is the Old Fort of Nal King in Jalpaiguri, better remembered as Nal Rajar Garh, Jalpaiguri. This historical monument is situated deep within the forests of Chilapata and can be visited by the tourist anytime of the year. The Chilapata forest is an elephant corridor between the Buxa Tiger Reserve and Jaldapara which is extremely rich in wildlife. 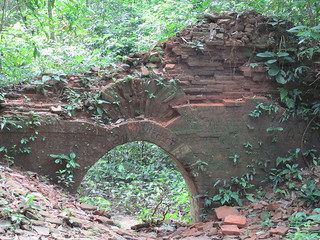 Ruins of the Nal Rajar Garh inside Chilapata Forest

The Old Fort of Nal King, or Nal Rajar Garh was constructed during the Gupta period in the fifth century A.D.  and is extremely significant both historically and archaeologically. This fortified complex is built with bricks and situated at Mendabari near the village of Kalchini. As one of the identified frontier fortification of the entire region, this was known as “Pundrabardhan Bhukti” in ancient times. Apart from the large tile shaped bricks, there are some stone temple remains around tenth to twelfth century A.D. as well as specimens of Muslim architecture in the adjoining area.

Nal Rajar Garh within the Chilapata forest is also thought to be the centre or capital of the ancient kingdom of Kamatapur (650 to 1498 CE) situated around the Brahmaputra Valley. Later the capital of Kamatapur was shifted to Maynaguri and still later to Prithu Rajar Garh.

The ruins of the Old Fort of Nal King, or the Nal Rajar Garh is a primary tourist attraction noted for its archaeological and historic value as a thousand years old structure. What remains today of the Nal Rajar Garh in Jalpaiguri are the broken fort gate and a wrecked wall. This historical structure belonging to the Gupta dynasty holds a prominent place among Jalpaiguri tourist attractions both for its intrinsic value and for its surrounding forest near the fort. This forest has a unique tree which is thought to bleed like a human being.

This entire complex is divided in two parts by a moat which is situated in its northern segment. This complex is reputed to be the Nal Rajar Garh which lies encircled by one moat in some places and in other places by a double moat.

The Nal Rajar Garh in Jalpaiguri is also an architectural edifice. Ghats or bathing staircases have been traced in one portion of the said moat. In fact the surviving part of the whole complex is thought to be considerably smaller than what it was originally.

Travelling to the Old Fort of Nal King Jalpaiguri

Known as the Mendabari ruins by the British, the Nal Rajar Garh is situated on the Bania river bank within the Chilapata forest. This forest is about 20 km from the town of Alipurduar and at a distance of 95 km from the town of Jalpaiguri. It is also well connected to important destination like Siliguri.

New Jalpaiguri is the nearest railway station from the Old Fort of Nal King in Jalpaiguri while Bagdogra is the closest airport situated about 140 kms from the sanctuary. 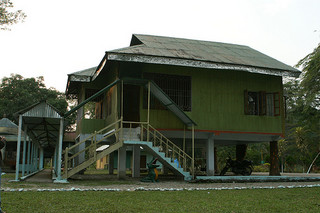 The historic tourist centre has no arrangements for nightstay. The nearest place to stay would be the Mendabari Jungle Camp which is the WBFDC sponsored eco-tourism resort in Kodalbasti slightly within the Chilapata Jungle. This resort has a fascinating setting behind Sonalu, Kanchan and Gamar trees. There is also a small jhora flowing in its vicinity and at night the environment around the bungalow is simply enchanting.

So enjoy your visit to the Old fort of Nal King, one of the prominent historic structures of Jalpaiguri Do not forget to take a guided tour to watch the wildlife of Chilapata forests like elephants, leopards, rhinos and wild pigs, which has developed into a popular tourist destination.