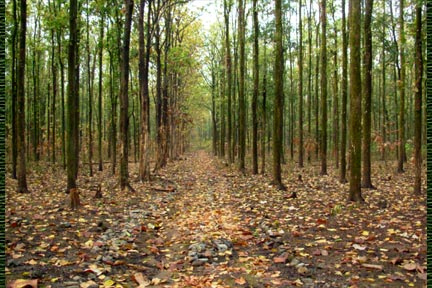 Raimatang in Jalpaiguri (Source: flickr)
A beautiful forest village in the Jalpaiguri district, Raimatang is a haven for all tourists who come to visit the Dooars region of West Bengal. Situated amidst pristine nature, Raimatang offers a much needed break for the visitors who travel through the Raimatang river bed to arrive and admire this serene beauty.

The forest around the Raimatang is renowned for elephants and other wildlife forms. This is especially true during the harvesting season when elephants come almost daily to the village by night. As a place surrounded by river, hills and forests, Raimatang is fast becoming a haunt for all nature and wildlife lovers. Besides, the forest village is surrounded by the Buxa Tiger Reserve situated in the Western Buxa region of Dooars.

Lush green tea gardens, hills, river and surrounding forests – be ready to seep in the awe inspiring feel of Mother Nature in Raimatang. Placed about 45 km away from Alipurduar, Raimatang rests far from the bustle of everyday life in its abundant natural beauty. A place which has escaped the adverse effects of mass tourism, Raimatang remains a much welcome sojourn for all wildlife lovers. 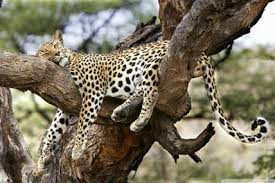 Raimatang has a watch tower which can be used by tourists to sight the numerous forms of wildlife in the locality during the day. Some of the common fauna sighted here the elephant, peacock, wild dog, parakeet, hornbill, hoopoe and others. The Hasimara forest in the adjoining area provides an exciting provision for being among a number of rare species of fauna as well as diverse flora.

The Raimatang riverbed is also a great place to picnic and relax amidst the beauty of nature. Be sure to spend some time along the river bed during the day. The river bed becomes dry through the summer but remains full during the monsoon season making it an attractive place.

For those who love adventure Raimatang offers trekking provisions to Pukhri, Adma and the nearby Mahakal cave. Besides, there is also a trek from the Raimatang village to Lepchaka through Chunabati and Aadma.This goes through the Buxa Tiger Reserve forest. The total distance of the trek is around 20 kms and one can halt in Chunabati during the night.

Enjoy the beauty of the surrounding Raimatang tea estate which is one of the youngest tea gardens within North Bengal.

Raimatang is at a distance of about 109 km from the city of Jalpaiguri, 154 km from Siliguri town about 17 km from Kalchini. If you drive via Kalchini which is near Hasimara through the tea gardens and forests, you will be able to reach Raimatang with ease. One has to travel through the much eroded river bed of Raimatang to reach this destination and hence, the last 3 km stretch over the river bed must be cautiously travelled.

The main point of arrival in Raimatang, as for any other destination in the Western Dooars is Alipurduar. It is located about 45 km from the place. One has to reach Alipurduar via train from Howrah or Sealdah station in West Bengal. There are buses which ply from Alipurduar to Kalchini, and from where you can hire a car which would take you to Raimatang. 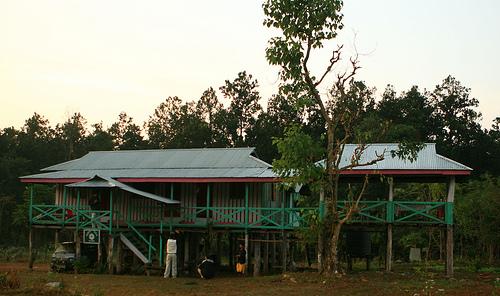 Aranya Mahal in Raimatang (Source: flickr)
Poised within the silence of adjacent wilderness, Raimatang is attracting numerous tourists who come to enjoy its surrounding natural beauty and wildlife. However, you must not expect star accommodation in Raimatang, which is primarily sought after for its seclusion and a sense of adventure amidst wildlife. Some of the places where the visitors to Raimatang can rest are:

So if you feel the jungle calling you, do not hesitate to select Raimatang in the Dooars region which is fast emerging as a sought after tourist destination.